PennDOT is investing $90 million to rehabilitate the U.S.1 viaduct over the Nicetown section of Philadelphia.

Watch the project take shape by checking out the progress photos. 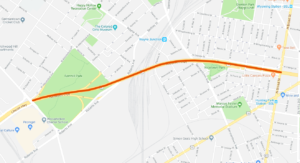 PennDOT is rehabilitating, repairing and repainting the steel superstructure and replacing the deck of the Chestnut Street bridge over the Schuylkill River that connects Center City Philadelphia with University City and West Philadelphia. The $103,589,847 project also will replace the decks of three adjacent Chestnut Street bridges, two viaducts on Schuylkill Avenue and two ramp structures for I-76 .

PennDOT is in the midst of a long-term, multi-phase initiative to rebuild and improve Interstate 95 in Pennsylvania. Five major projects to reconstruct the I-95 between the Interstate 676 and Cottman Avenue interchanges in Philadelphia are in various stages of design or construction, including active projects at the Girard Avenue, Allegheny Avenue and Betsy Ross/Bridge Street interchanges. Construction also is underway on the Adams Avenue Connector.

Subscribe to receive project news and travel advisories via email.